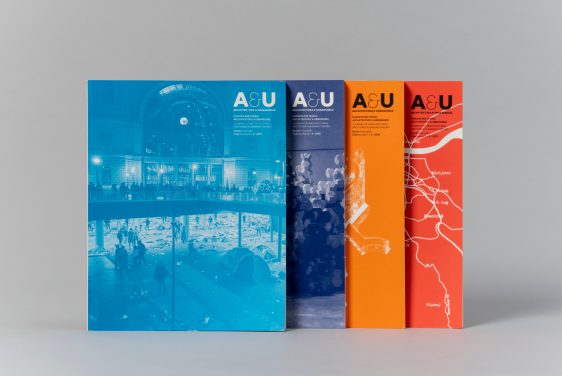 Architektúra & urbanismus is indexed in Web of Science Core Collection and Humanities Citation Index and in Current Contents – Arts & Humanities, in SCOPUS the Elsevier Bibliographic Database, in Journal index of the Royal Institute of British Architects (RIBA), Central and East European online Library (CEEOL) and EBSCO.

Architektúra & urbanizmus is an open-access journal which means that all content is freely available to the users or their institution. Users are allowed to read, download, copy, distribute, print, search, or link to the full texts of the articles, or use them for any other lawful purpose, without asking prior permission from the publisher or the author. The journal is open access according to definition of Budapest Open Access Initiative (BOAI) and the contributions are licensed under public license CC-BY 4.0.

The decade of the 1960s was an exceptionally favourable one for the Czechoslovak cultural and intellectual world. It was during this time that a great many noteworthy initiatives arose across all areas of social life – and the scholarly sphere was no exception. The era’s overall enthusiasm, the emergence of new research trajectories and the desire to present the results achieved at the highest possible level were reflected, specifically, in the founding of the first scholarly journal treating architectural design and urban planning in Czechoslovakia. Architektúra & urbanizmus, journal of architectural and townplanning theory, to give its full title, was created in 1967 with its institutional base in the Institute of Construction and Architecture of the Slovak Academy of Sciences (ÚSTARCH SAV) in Bratislava, working in cooperation with the Department for the Theory of Architecture and Creation of Living Space of the Czechoslovak Academy of Sciences in Prague.

The greatest credit in the creation of this journal should be assigned to Emanuel Hruška, Tibor Zalčík and Richard Kittler. The Czech-born Emanuel Hruška (1906 – 1989) was one of the founding group of architecture professors at the Faculty of Architecture and Construction at the Slovak Technical Institutes (now the Slovak Technical University) in Bratislava, serving as the first chair of the journal’s editorial board (members of the first editorial board were famous Slovak and Czech architects and academics as Emil Belluš, Bohslav Fuchs, Martin Kusý, Jiří Hrůza, Jiří Voženílek, or Jozef Lacko). The driving intelligence behind the journal for many years was the deputy chief editor Tibor Zalčík (1927 – 1985), who as head of the Department of Urban Theory of ÚSTARCH SAV held a major influence on the key decisions concerning the journal, and specialised in the history of urban planning. In the revolutionary year of 1989, the second head of the editorial board became a younger member of the founding generation, internationally recognized building physics Richard Kittler (1930), who for some time already had contributed greatly towards the shaping of the periodical’s technical-scientific dimension. In 1991, the third chair of the editorial board became Matúš Dulla, whose period of service was marked by the difficult transition period of the early 1990s, in the end of the decade the journal periodicity was reduced from for printed issue per year to two (1-2 a 3-4). Also the focus of the journal was more specialised toward the theory and history of architecture and town-planning of 20th and 21st century in Central and Eastern Europe. This changes were connected also with the  transformation of the (ÚSTARCH SAV) and the founding of the Department of Architecture whose researchers managed the journals publishing. In this time among the standard issues there started a tradition of the monothematic focused issues. The international scope of the journal gradually began to expand mostly after a new deputy chief editor, Henrieta Moravčíková, took over in 2009. This reflected also the grow of the editorial board by foreign specialist as Akos Moravanszky, Friedrich Achleitner or Rostislav Švácha. The journal was gradually indexed in the international databases as SCOPUS (from 2009) and WOS (from 2015). In 2019 Henrieta Moravčíková became the editor in chief and also the editorial board expanded to new renowned academics from the central and East South Europe region as Matthias Boeckl, Sonja Ifko, Pál Ritook, Karin Šerman or Maria Topoločanska. From the year 2021, the journal is published both physically and online as open access journal.

The journal Architektúra & urbanizmus requires high standards of publication ethics and prevention of publication malpractice. The journal accepts only original manuscripts which have not been published or submitted to another publisher before, should be written by stated authors, include no unlawful statements, do not infringe the rights of others, and quote the sources appropriately. The review process is anonymous. The reviewers should have no conflict of interest with respect to reviewed articles. The judgements should be objective. The editors and publisher have to take all steps to ensure the quality of published articles. The ethic statements of Architektúra & urbanizmus are based on COPE’s Best Practice Guidelines for Journal Editors.