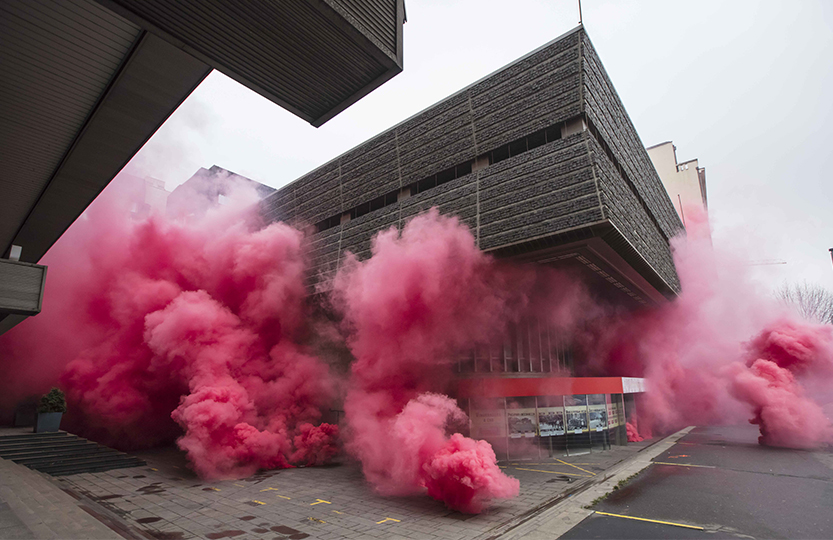 Half a century ago, in 1971, demolition began on the Pruitt-Igoe housing project in St. Louis, with the destruction of this unsuccessful social housing scheme, once winning national architectural awards, broadcast live on television. Later, Charles Jencks in his The Language of Post-Modern Architecture termed the destruction of the project the “death of Modernism” and placed it as a milestone on his proposed chronological axis of architectural development.
Today, we are witnessing a global wave of demolition of iconic examples of postwar Modernism: Berlin’s Palast der Republik, London’s Robin Hood Gardens, Katowice’s main rail station, Prague’s Transgas offices. Yet unlike the demolition fifty years previous, these actions have stimulated much public discussion about the heritage of Modernism or Brutalism on both sides of the former Iron Curtain. A key role in activating public opinion against the destruction of the often unpopular and long-criticised buildings, in turn, has been played by architectural theorists and historians, who have frequently left the traditional position of objective scholarship and themselves emerged as activists.
Should we regard the present engagement of the scholarly community in the struggles for the protection of architectonic heritage as individual departures from the ivory tower, or does it form an integral component of research work? Is the immediate threat to researched buildings the opportunity for the emergence of new interpretive frameworks for architecture and the uncovering of innovative methods in the area of heritage protection? Or, conversely, does this engagement pose more of a threat to objectivity, and hence even the foundations of research itself?
At the same time, it is necessary to recall that this is hardly the first instance when the looming destruction of artistic or architectonic works has influenced the scholarly discourse. Indeed, the very start of heritage protection as a scholarly discipline is connected to the wave of demolition or damage to sacral architecture during the French Revolution.
Should we understand the current wave of demolition of post-war Modernist architecture and the ensuing reaction to it as another turning point in the reception of this period in general? Could the discussion regarding the threat to the postwar architectural fund, which forms 70 % of all built matter on the planet, form a contribution to a radical rethinking of current architectural and heritage practice?
In the monothematic issue of the journal Architektúra & Urbanizmus, we welcome contributions reflecting the ongoing discussion on the legacy of postwar Modernism on both sides of the former Iron Curtain, studies analysing the historical and social contexts of the protection of postwar Modernist architecture, texts outlining new theoretical perspectives of the engaged approach toward researching architecture and urban planning, as well as research and interpretation studies of specific examples of the architectural and urban works of postwar Modernism.

To submit your manuscript for consideration in this special issue, please use our online form.